A sex offender was called on by President Donald Trump’s attorney, Rudy Giuliani,  to be a witness for voter fraud allegations.

Daryl Brooks, a GOP poll watcher, was convicted in the 1990s for sexual assault, lewdness, and endangering the welfare of a minor.

“They did not allow us to see anything. Was it corrupt or not? But give us an opportunity as poll watchers to view all the documents – all of the ballots,” said Brooks.

Political insiders were amazed to see Brooks at the podium speaking.

“I started watching it, and all of a sudden I was like, there’s New Jersey’s perennial candidate claiming to live in Philadelphia and Giuliani claiming him to be a poll watcher and Philadelphia resident,” said Trenton Mayor Reed Gusciora.

Brooks said he didn’t think his conviction was relevant. He said that Giuliani was seeking the truth.

Brooks believes he was set up by the cops after being convicted of sex crimes and endangerment.

“I went to prison for three-and-a-half years. That’s what they said I did. I was 25-years-old,” declared Brooke. “I was an activist, always doing the right thing. They lied to me. The cops set me up.” 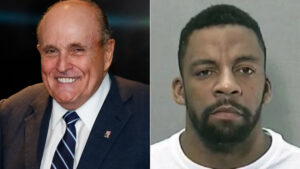 Raven Haywood is a journalist for 10+ years. Graduate from Howard University.
Previous Multiple States Coming Together To Replace The Electoral College
Next Donald Trump, Jr. and Kimberly Guilfoyle Strategizing How to Expand Their Influence At RNC & Take Over