In politics, a lame duck or outgoing politician is an elected official whose successor has already been elected or will be soon. The official is often seen as having less influence with other politicians due to the limited time left in office. 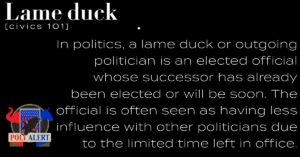 The head honcho.
Next Navajo Nation Turned Arizona Blue In The 2020 Presidential Election