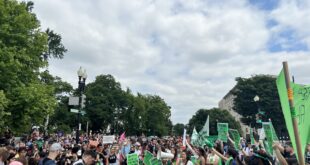 Over the past two weeks, Diamond Cotton has encountered a lot of empty shelves.

At her local CVS, Walmart and Kroger in Indianapolis, the tampon aisles have stood bare, wiped out by a shortage that began as a ripple in the supply chain and then in the past few weeks turned into a wave that has cleared out many major retailers across the country.

It took Cotton driving to numerous stores over days to find enough for her two daughters, who have both started menstruating and would need tampons to go swimming this summer.

At 15 weeks pregnant, she also had to think about what’s happening just a few aisles down, where the baby formula is kept. Her youngest son, now 4, was born premature after only 23 weeks gestation, and she couldn’t produce enough breastmilk to feed him then.

Would she be facing twin shortages — for tampons and for formula — in a couple of months?

And what about after, with four young kids? Cotton already isn’t working largely because she can’t find child care for her three children, especially in the summer. It’s been difficult to find a daycare that will take her son, who has developmental delays, and a summer camp she can afford for her daughters. About 1 in 9 child care jobs are still missing since the start of the pandemic, and wait lists for child care spots can be years long.

“It’s either they don’t have room or there is not available staff,” Cotton said. She described a never-ending cycle: “You can’t get care, that means you lose your job. If you lose your job, how are you going to provide the things you need?”

She’s managing all of that as she’s watching gas prices shoot up and purchasing groceries for her family from a list that each week grows more limited. Women, particularly those who are sole heads of households, are affected more than men by food inflation. Last month, the cost of groceries rose nearly 12 percent since May 2021 — the largest increase since 1979.

The takeaway for Cotton is pretty clear: “For women and children, there is not enough support,” she said.

Audrey Goodson Kingo, the editor in chief of Mother Honestly, a platform for working moms, said the compounding challenges that parents are facing is taking a mental toll — many working moms are saying they can’t prepare for the future because they don’t know what new problem they may be facing soon, she said.

“All of it together just indicates there is a lot of friction in working moms’ lives right now. That normalcy we all keep patiently awaiting remains ever elusive,” Goodson Kingo said. “If you read the tea leaves of where we stand in America regarding moms, it’s harder to be optimistic.”

The tampon shortage is the latest in this series of layered crises. Tampons were hit by some of the same hoarding that happened with toilet paper in early 2020, and then suffered the challenges of supply chain disruptions with raw materials and transportation that have been common throughout the pandemic. Tampons have been hit harder than other menstrual products because they are most difficult to produce, require more components and require more staff. Labor shortages at plants have also compounded the problem, said Kate Barker Swindell, the services and operations manager at PERIOD, which helps provide period products through a network of about 500 organizations nationwide.

“It’s a very fragile, vulnerable supply chain, just as with the formula  — everything is so specialized,” Barker Swindell said.

The formula shortage, which has been raging for months, was kicked off by the closure earlier this year of a major plant that produces the largest batch of the nation’s formula.

The two shortages have two things in common: Formula and tampons are produced by few companies, so when a major manufacturer — Abbott Nutrition in the case of formula and Procter & Gamble, the maker of Tampax and holder of almost half of the market share of menstrual products — face challenges, the whole industry feels it. Formula and tampons are also not interchangeable the way a bar stool or a laptop might be during a furniture or microchip shortage — you can wait a little longer for them or get by with a different brand, but formula and tampons are essential items that cannot wait and have very few alternatives.

Procter & Gamble said in a statement to The 19th that the tampon shortage is a “temporary situation.”

“The Tampax team is producing tampons 24/7 to meet the increased demand for our products. We are working with our retail partners to maximize availability, which has significantly increased over the last several months,” P&G said. Tampon brands Playtex and Honey Pot did not respond to requests for comment.

CVS and Walgreens confirmed that shortages were hitting their shelves after pictures started to surface in the past few weeks of their empty aisles.

“In recent weeks, there have been instances when suppliers have not been able to fulfill the full quantities of orders placed. If a local store is temporarily out of specific products, we work to replenish those items as quickly as possible,” CVS said in a statement.

Walgreens said some of the shortages are brand-specific and in certain geographies, but did not specify which.

To advocates of gender equity, the tampon shortage is another example of how issues that have long affected women and marginalized people have gone ignored — until they reach a crisis.

In Washington, D.C., Dana Marlowe, the founder and executive director of I Support the Girls, which collects and donates tampons, pads, bras and other products to people experiencing homelessness, noticed the shortage start to hit several months ago when fewer donations of tampons started to come in from manufacturers and individuals and through donation drives.

“Our warehouse manager would say, ‘We have three boxes of tampons. You have more supply of tampons in your house than we have in our warehouse,’” Marlowe said.

Compared with the same timeframe in 2021, the number of tampons I Support the Girls was able to donate to people in need between January and June this year dropped 52 percent, according to data Marlowe provided The 19th.

Barker Swindell at PERIOD said the organization had to close its waitlist for period products about a month ago because it had grown too long, with requests pouring in for disposable tampons and pads, and especially reusable items like menstrual cups and period underwear. It’s a crisis that has been building throughout the pandemic.

“We would get pallets full of stuff from major corporations that we would be giving out to service partners. We have not gotten anything like that in the last two years,” she said. “[We have] empty rooms of tampons.”

People trying to sound the alarm about the tampon shortage face two challenges: a knowledge gap about how critical tampons are to menstruating people’s health and the treatment of periods in American culture, often as the butt of a joke, said Jennifer Weiss-Wolf, the women and democracy fellow at the Brennan Center for Justice, a nonprofit law and policy institute, and the author of “Periods Gone Public: Taking a Stand for Menstrual Equity.”

Many headlines about the tampon shortage have instead been about the comedian Amy Schumer. After jokes started circulating that the success of her summer 2020 ad campaign with Tampax is the reason behind the shortage, Schumer had to respond: “I don’t even have a uterus,” she said, referring to recent endometriosis surgery that included a hysterectomy.

The importance of access to basic needs and its connection with economic mobility has been documented in the formula and child care shortages, as well. Many were quick to point to breastfeeding as an alternative to formula, prompting discussions about how breastfeeding — for those who want to do it and can do it — also requires a job with flexibility and privacy to pump, something many low-wage jobs lack. Similarly, the connection with access to child care and one’s ability to work was well-documented during the pandemic when waves of parents, most of them mothers, left their jobs to care for children.

“What is the common denominator in all of these things — who are the people who are responsible largely for these purchases, who need them for managing their own bodies and their ability to take care of those around them?” Weiss-Wolf said. “It’s just another flick to the forehead when we see a shortage like this and when we see it being treated sort of in a tongue-in-cheek way instead of understanding that it is endemic to all of the ways our bodies are ill-considered and under assault right now in this country.”

Weiss-Wolf has been part of a years-long campaign lobbying states to exempt tampons from sales tax, like food and prescription medication already are in many states. So far, 25 states still do not.

“If menstrual products are somehow being classified as anything but a necessity, that is problematic for how we talk and think about menstruation and make a case that access to menstrual products is something that is intrinsic to our ability to participate fully and fairly in society,” Weiss-Wolf said.

At grocery stores around the country, staff have watched the impact of the tampon and formula shortages hit women, menstruating people and parents.

“It’s really hard to see people in these departments and just staring at nothing and not knowing what to say because we are just a broken record at this point,” said Maegan Rule, the grocery manager at a Vons in Huntington Beach, California.

Rule has been working to try to keep shelves stocked by calling neighboring stores and trying to bring in products or other brands. She said she first noticed the tampon shortage three months ago when boxes with smaller quantities of tampons started to come in, particularly Tampax tampons. She estimates she has about 30 percent of her usual tampon stock in-store now most days. For formula, it’s running at about 10 percent.

At The Flow Initiative in New Jersey, an organization working to combat period poverty, requests for tampons are coming in for the first time since the organization launched in 2019, said Eiko La Boria, the group’s founder and CEO. The Flow Initiative typically gets requests for pads, which are more popular in many of the Latinx communities it serves, but tampon requests are up, particularly for people experiencing homelessness, who may prefer tampons because they don’t require having underwear.

Those who work with vulnerable populations, like Marlowe, know the ones who will be hit the hardest are the communities that are not often considered when crisis hits. Transgender men and nonbinary people already have to navigate limited access to menstrual products in restrooms, discrimination that may dissuade them from purchasing items in stores and gender-specific labeling. Survivors of domestic violence are also acutely affected, Marlow said, because most flee abusers without taking products with them and some have faced experiences with abusers who withhold menstrual products from them.

She plans to distribute the tampons she does have to those populations during the shortage, she said.

“One of the things we will really strive to do is we recognize that choice is a privilege,” Marlowe said. “For folks in need, if they want tampons and so much is stripped from them, when it comes to managing your menstrual hygiene and your period we want to do our very best to provide that little bit of dignity that comes with choice in the product that you prefer.”

Shefali Luthra contributed to this report.