Americans have blamed many culprits, from mental illness to inadequate security, for the tragic mass shootings that are occurring with increasing frequency in schools, offices and theaters across the U.S.

The latest, which occurred on May 24, 2022, at a Texas elementary school and left at least 19 children and two teachers dead, was the 213th mass shooting this year – and the 27th that took place in a school.

Yet during much of America’s ongoing conversation about the root causes of gun violence, the makers of guns have typically escaped scrutiny. As a public health researcher, I find this odd, because evidence shows that the culture around guns contributes significantly to gun violence. And firearm manufacturers have played a major role in influencing American gun culture.

That’s beginning to change, particularly since the US$73 million settlement between the families of victims of the 2012 Sandy Hook Elementary School shooting and the maker of the rifle used in the massacre. This may open the door for more lawsuits against firearm manufacturers.

To help support this much-needed discussion, I’d like to share some critical facts about the firearm industry that I’ve learned from my research on gun violence prevention. 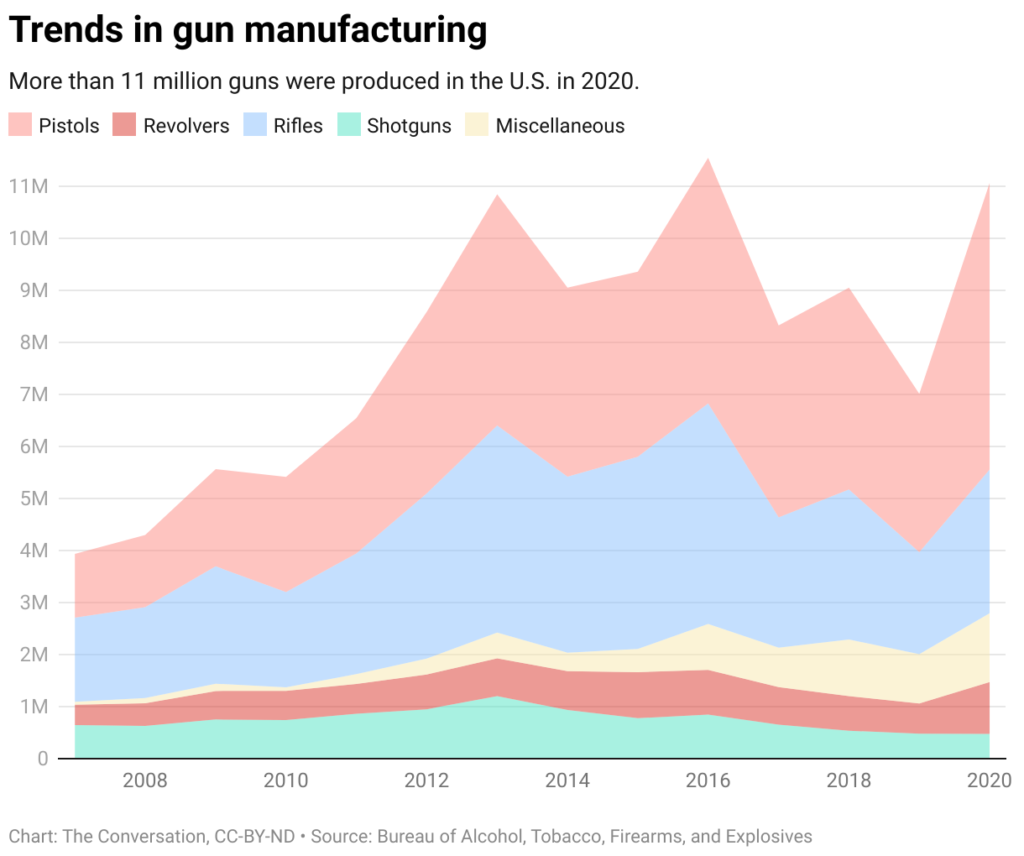 But all that only tells part of the story. A look at the caliber of pistols manufactured over the past decade reveals a significant change in demand that has reshaped the industry.

This indicates a growing demand for more lethal weapons, especially those focused specifically on self-defense and concealed carry.

The production of rifles has also increased, doubling from 1.4 million in 2005 to 2.8 million in 2020, though down from a record 4.2 million in 2016. This is driven primarily by a higher demand for semi-automatic weapons, including assault rifles. 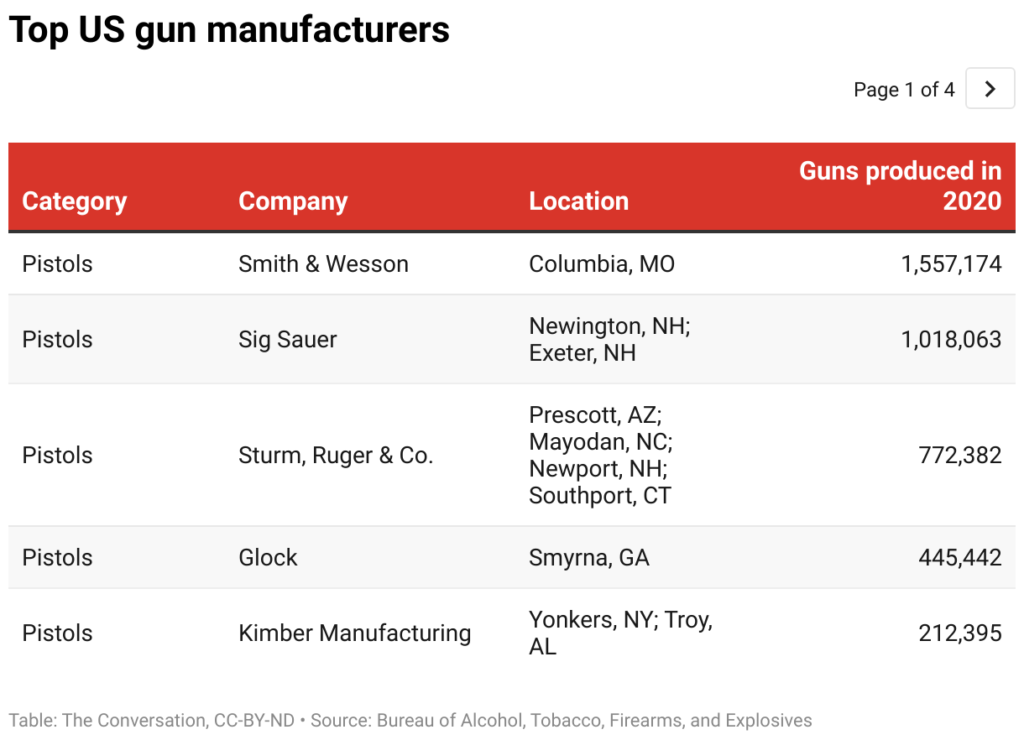 So what can explain the jump in the sale of high-caliber handguns and semi-automatic rifles?

Gun-makers have become very effective at marketing their wares as necessary tools for self-defense – perhaps in large part to offset a decline in demand for recreational use.

For example, in 2005, Smith & Wesson announced a major new marketing campaign focused on “safety, security, protection and sport.” The number of guns the company sold soared after the switch, climbing 30% in 2005 and 50% in 2006, led by strong growth in pistol sales. By comparison, the number of firearms sold in 2004 rose 11% over the previous year.

Why do Americans own guns?

Over the last two decades, fewer Americans have cited hunting and sport as their reasons for owning guns. In 2021, 88% of gun owners said self-defense was a key reason.

There’s strong survey evidence that gun owners have become less likely to cite hunting or sport as a reason for their ownership, instead pointing to personal security. The percentage of gun owners who told Gallup that the reason they possessed a firearm was for hunting fell to 40% in 2019 from almost 60% in 2000. The share that cited “sport” as their reason fell even more.

Wyoming has the highest rate of home gun ownership, with 70% of households reporting at least one firearm. Hawaii has the lowest at 17%. Data as of 2020. 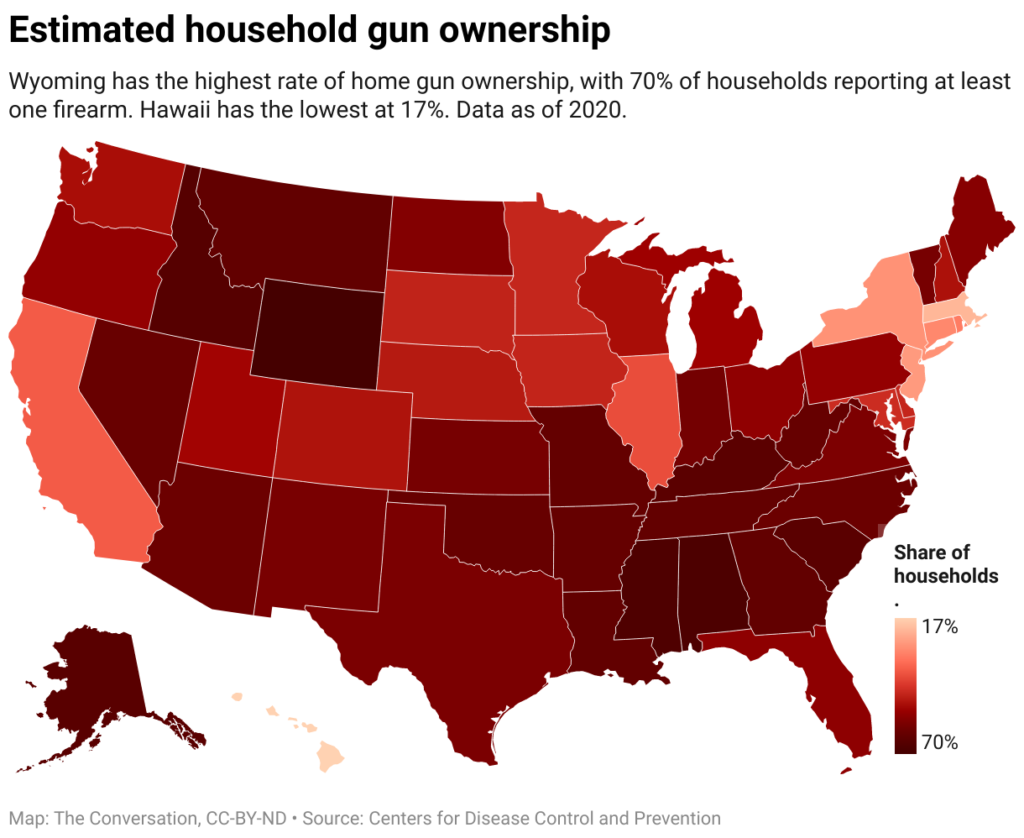 Another possible explanation for the uptick in handguns could be the widespread adoption of state “stand your ground” laws in recent years. These laws explicitly allow people to use guns as a first resort for self-defense in the face of a threat.

Utah enacted the first “stand your ground” measure in 1994. The second law wasn’t adopted until 2005 in Florida. A year later, “stand your ground” laws took off, with 11 states enacting one in 2006 alone. Another 15 have passed such laws since then, bringing the total number of states that have them on the books to 28.

From 2004 to 2022, 28 states enacted a “stand your ground” law allowing a person to shoot another if they perceive a threat of bodily harm.

These laws were the result of a concerted National Rifle Association lobbying campaign. For example, Florida’s law, which George Zimmerman used in 2013 to escape charges for killing Trayvon Martin, was drafted by former NRA President Marion Hammer.

It’s not clear whether the campaign to promote stand-your-ground laws fueled the surge in handgun production. But it’s possible that it’s part of a larger effort to normalize the ownership of firearms for self-defense.

This overall picture suggests that a marketing change fueled an increased demand for more lethal weapons. This, in turn, appears to have fostered a change in gun culture, which has shifted away from an appreciation of the use of guns for hunting, sport and recreation and toward a view that guns are a necessity to protect oneself from criminals.

How and whether this change in gun culture is influencing rates of firearms violence is a question I’m currently researching.

Michael Siegel, is visiting professor of public health and community medicine at Tufts University. This article is republished from The Conversation under a Creative Commons license. Read the original article.