People Are Rallying This Weekend For Abortion Rights. What Comes Next?

The House Oversight Committee said on Friday that it is launching an investigation into the four largest baby formula manufacturers and seeking answers on how to ramp up production amid a nationwide shortage.

“The national formula shortage poses a threat to the health and economic security of infants and families in communities throughout the country—particularly those with less income who have historically experienced health inequities, including food insecurity,” wrote Rep. Carolyn B. Maloney, Chairwoman of the Committee on Oversight and Reform, and Rep. Raja Krishnamoorthi, Chairman of the Subcommittee on Economic and Consumer Policy

“It is critical that your company take all possible steps to increase the supply of formula and prevent price gouging.”

Following a recall of several of Abbott Nutrition’s powder infant formula products, the national out-of-stock rate for infant formula has risen to 43%—a 10% increase from last month’s average.  In five states, the out-of-stock-rate is greater than 50%.

According to the Centers for Disease Control and Prevention, approximately three-quarters of parents use formula to feed their infants.  As a result of the baby formula shortage, some parents are being forced to ration food or travel for hours to obtain formula, and chain retailers are limiting the amount of formula families can purchase at one time.  Third-party online retailers are reportedly taking advantage of the shortage by charging exorbitant prices—in some cases charging families as much as three times the standard price for a can of formula.

The Chairs requested detailed information about the steps the four manufacturers are taking to address the shortage, as well as information and documents from Abbott Nutrition regarding the company’s nationwide recall of several powder infant formula products.

The Chairs are requesting a briefing and responses from the manufacturers by May 26, 2022.

President Joe Biden met on Thursday with executives from infant formula manufacturers and retailers, pressing them to do everything possible to get families access.

Some manufacturers have been ramping up production for weeks and officials are also focusing on how to get formula on store shelves faster, said Brian Deese, director of the White House National Economic Council.

The Food and Drug Administration will announce new steps in the coming days on importing certain infant formula products, the White House said on Thursday, and Biden has asked the Federal Trade Commission to probe reports of predatory conduct such as price gouging.

Deese would not speculate on how long the shortages might last.

“All of these steps together will make progress. It’s not going to solve itself in a day or week,” he said. 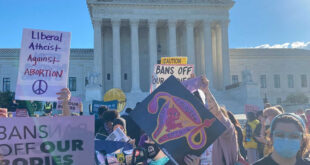 In light of the news of the potential overturn of Roe v. Wade, major activist …