Atlanta Dream, Co-Owned By Former Sen. Kelly Loeffler, Is Close To Being Sold

Last summer, former Senator Kelly Loeffler faced scrutiny for calling on the WNBA’s commissioner to drop support for the Black Lives Matter movement. Loeffler is co-owner of the league’s team in Atlanta and was against the league putting “Black Lives Matter” and “Say Her Name” slogans on warmup gear and opening weekend team uniforms.

“The truth is, we need less — not more politics in sports,” Loeffler said in a letter to the league’s commissioner, Cathy Englebert. “In a time when polarizing politics is as divisive as ever, sports has the power to be a unifying antidote.”

Engelbert rejected the appeal, saying the league would “continue to use our platforms to vigorously advocate for social justice.” The players union demanded Loeffler be removed as an owner of the Atlanta Dream.

The entire roster of the Dream and other players around the league began to openly campaign for her opponent in the Georgia Senate race, Rev. Raphael Warnock, by wearing “Vote Warnock” shirts to games. 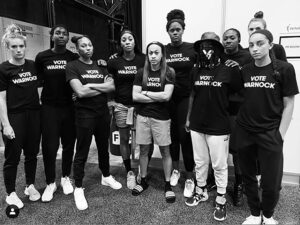 Face forward to January. Loeffler lost her Senate seat to Mr. Warnock, and now she may be losing her ownership stake in the Dream as well.

According to the WNBA, a deal for the sale of the Atlanta Dream “is close to being finalized. Once the sale negotiation is concluded, additional information will be provided.”

According to Ramona Shelburne of ESPN, “up to five bidders have expressed interest in buying the team, with Kelly Loeffler, currently a co-owner, expected to have no association with the franchise after the sale.”

Ariana Figueroa, Nebraska Examiner The U.S. Senate on Thursday voted to codify an agreement the …